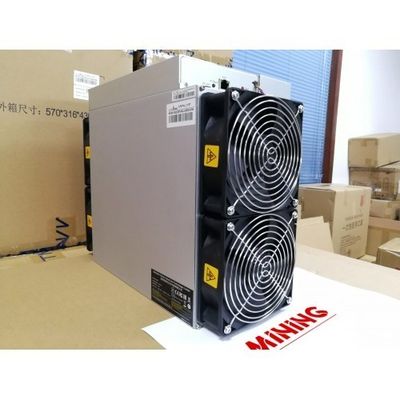 The most productive of the completely new line of Bitmain S19 Pro gives 110t hashrate - it's time to get some on the eve of the May halving, when the hash network reaches new heights. With the first ASICs from the series, the company decided to immediately stake out a leading position in the mining equipment market.

Bitmain managed to further reduce the power consumption of its s19 ASICs to 3.25 kW, which gave an energy efficiency of 29.5 ±% 5J / TH. Plus, it has a power saving mode!

The miner comes with an efficiency of 0.031j/Gh, which is higher than most Bitcoin miners. It’s a result of having a miner with high power consumption. The miner packs a punch when it comes to Bitcoin mining power of 3050W.
It’s one of the few miners that have a power consumption of over 3000W. And this translates to high electricity costs of mining with the equipment. You have to know your electricity rates before committing to mine with this unit.
100 TH/s is the hash rate that comes with this mining equipment. The hash rate is huge, and this means more consistency in producing Bitcoin. A high hash rate means that the algorithm is secure. Once you get a miner with a high hash rate, the chances of mining more coins increase.
That’s the reason why miners will go for this unit. With all things considered, the high hash rate will deliver newly minted Bitcoin faster.

ANTMINER S19J 95TH from Bitmain is designed for mining SHA-256 algorithm with a maximum hash rate of /s, power consumption of W±10%, and power efficiency of W/Th. This mining server uses industry-leading solutions and an optimized design. Machines are easy to deploy and adaptive to mining farms of different sizes.

The entire line of new Antminer S19 from Bitmain has been released with new 7nm chips, they allowed achieving excellent energy savings, an energy efficiency indicator of 34.5 ±% 5 J / TH. More hash without the daunting rise in electricity bills - it's real!

The Antminer s19 comes, like the 17th series, with a built-in power supply for greater efficiency. And the system of parallel installed fans allows you not to overheat even when working around the clock in room conditions.

There’s no exact number for the efficiency of the miner. We will have to run with 90T/3100W as the available efficiency. What this means is that the miner is not leaving any chances when it comes to power. It has a power consumption of 3100W, which is one of the biggest in the industry.
With this power, users should expect to mine faster even though at a price. The electricity cost will be higher than most Bitcoin miners.
It comes with a high hash rate of 90 TH, which is impressive for all reasons. With a high hash rate, miners get the chance to mine faster and in a secure environment. The high hash rate also enables miners to mine Bitcoin better.
Such a miner is effective in enabling miners to grasp new Bitcoin before anyone else. By joining a mining pool, the high hash rate will come at a huge advantage.