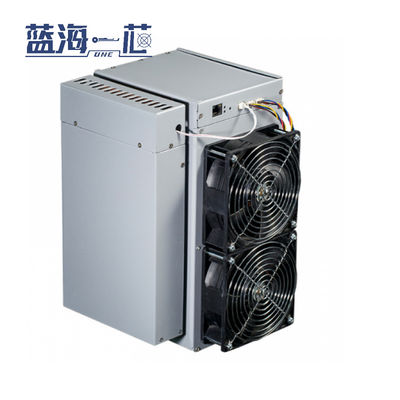 The crypto mining world is full of competition, with giants like Bitmain and Innosilicon stifling any threat to their dominance. It was quite tricky for a lesser-known mining hardware manufacturer to make an impact in the industry. Zhejiang Ebang company, a tech company that engages in R&D, manufacturing, and telecommunications products, makes this miner. Trying to break the dominance of notable mining hardware manufacturers like Bitmain, they launched the Ebit series. The on-paper power consumption for the E 12 Miner stays at 1980W. This value is actual.

About Ebang Ebit E12
The Ebit Miner E12 is cost-effective and efficient mining hardware. It has state of the art, developed, 10-nanometer chips — DW1233 — to reach a hash rate of 44Th/s and power consumption of 50W/T. To keep the temperature low and improve productivity, the Ebit 12 uses an independent heatsink that uses the latest bonding technology. This device also has a secure anti-loosening frame and a robust framework to provide operational stability and protection from damage.

Samsung manufactures the 10nm chips Ebang uses in their Ebit series. Since the industry standard is at creating and using 16nm chips, these 10nm chips are an upgrade and aren't used widely by manufacturers.

The Ebit E12 is an addition to the Ebit series, an improvement from the Ebit 1, and was released in September 2019. This new device has similarities with the previous model, which has a hash rate of 44Th/s. The Ebit E12 comes with a hash rate of 44Th/s and power consumption of 1980W, and power efficiency of 0.05j/Gh. But the hash rate and power consumption aren't the only aspects to consider in this model. The Ebang Ebit E12 has size dimensions of 215 x 196 x 310mm and weighs about 10.15kg.

Algorithm
The Ebit 12 works with the SHA-256 algorithm, which mines up to 40 coins, but its top coins are (BTC) Bitcoin and (BCH). SHA-256 is a part of the SHA-2 cryptographic hash function designed by the National Security Agency (NSA). SHA stands for Secure Hash Algorithm. Cryptographic computing functions are mathematical calculations run of digital data by comparing the computed 'hash' to a well-known hash value.

Fans and Temperature
The Ebit 12 comes with two fans installed within the unit, which guarantees that its recommended temperature of between 5°C–45 °C is steadily maintained. The humidity is about 5%–95%.

Weight and Dimensions
The Ebit E12 unit weighs around 10.5kg, which is about the average miner weight. Simultaneously, the unit's dimensions happen to be around 215 x 196 x 310mm, which paints a miner being on par with industry standards.

This device's noise level is 75 dB, but the device can get noisier than that, which is actually in line with the performance of previous miners made by Ebang. To better understand that, the average miners' noise level is about 60-80dB, which is standard. The Ebit E12 can be heard from the staircase in residential areas, but it is best used at mining farms.

But factors like electricity rates of the area and market conditions tend to affect the profitability of miners.

When the market favors the coins, profitability is entirely possible. A day's worth of mining with this miner will give an estimated income of $5.85. Due to high electricity costs, the overall profit in a day is -0.15. Miners should be aware that the profit changes depending on which coin the market favors.