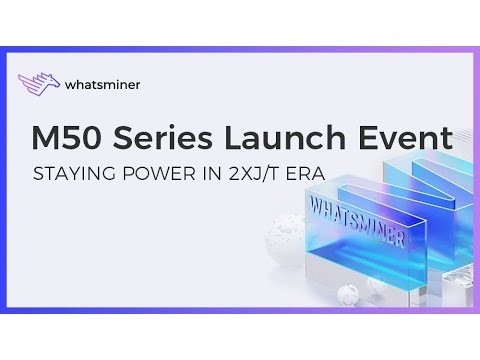 On April 06, 2022, MicroBT, one of the leading manufacturers of top mining equipment, released the latest WhatsMiner M50 series of miners at the Bitcoin 2022 event held in Miami (USA).

The technology company was founded in 2016 and is located in Shenzhen, China. It specializes in the design and production of high-performance chips, mainly for the SHA-256 algorithm, specialized for mining, the organization is also engaged in the development of blockchain technologies, cloud computing and artificial intelligence.

WhatsMiner brand is well known for its stable mining capabilities, the previously released WhatsMiner M20 series, which was the best-selling series of mining hardware in the world, had a cumulative repair rate of 2.59%, and the cumulative repair rate of WhatsMiner M30 series was only 1.66%. MicroBT is confident in its quality and stability and has become the first manufacturer to announce a one-year warranty period in the industry.

The most profitable ASIC at the moment, considering the average electricity price of $0.05, is the M30S. But even the flagship Whatsminer devices are inferior in terms of characteristics and price / quality level to ASICs manufactured by Bitmain. But the other day they announced Asic, quite capable of overtaking the flagship Antminer S19.

This time, the organization decided to publish detailed information about the fifth generation of high-performance air-cooled and water-cooled ASICs. The M50 and M50S miners are a standard elongated case, typical for all MicroBT devices, with a built-in power supply on top. Cooling is also carried out thanks to two powerful fans located on the sides.

But the company decided to go ahead with the future and designed the heavy duty M53 as a flat box with the bare minimum of required ports.

Analysts believe that the M50 series will help usher in the 2X J/T era, and become a cutting-edge product, replacing the M30 series to become the future mining king for 3 or more years.

The miners are built on chips manufactured by the tech industry giant, Samsung, with a 5-nanometer process technology. All work also takes place on the SHA-256 algorithm, which allows you to mine Bitcoin, Bitcoin Cash and other cryptocurrencies. The advantages are:

CHARACTERISTICS COMPARED TO THE M50 RANGE

The declared parameters of the new line are as follows

The characteristics speak for themselves, the miners have high power and energy efficiency.

COMPARE WITH THE PREVIOUS M30 LINE:

Improvements are visible in all parameters, on average, the new line came out 15% more efficient than the previous one.

The M50 will generate $600 per month and, with the declared characteristics, will have a payback of about 14 months.

The M50S generates $660 per month, which is not much more than the slightly weaker version, and will pay off in 15-16 months and reach net profit a year before the next halving.

M53 is the most powerful ASIC in the line and is capable of bringing in $1200 monthly with a payback of 12 months.

Technology from MicroBT can really overtake and leave behind its competitors from Bitmain. They also found a way to maintain power throughout the working hours, which was a problem with other models.